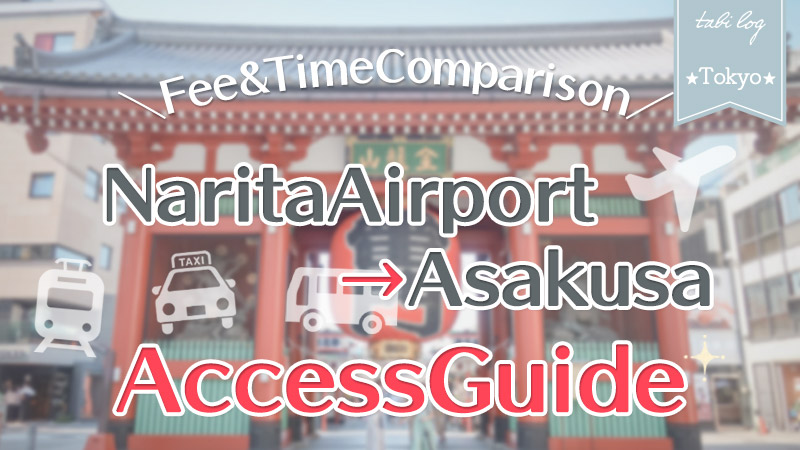 I wanna go to Asakusa from NRT…
Which way is Cheaper and Easier?

For such a person, this time…
I explain transportation 【Narita Airport (NRT)→Asakusa】!

If you look at this, you can see how to get to Asakusa, the【 Price & Time & Transfer】!

Let’s check it out!

“Narita Airport” has the highest airport utilization rate in Japan! but…

You don’t know the location of the airport to each place of Tokyo!

First, let’s grasp the positional relationship on the route map!

Narita Airport is a little far from Tokyo, abt.1～2hours by train or car.

Cheapness, speed, easy… Let’s choose the transportation depending on which one is important!

▼ This is 【NRT ⇔ Asakusa Access Comparison】 by each transportation!

There are some transfer from NRT to Asakusa, so it may be a little confusing.

The easiest way is to go to Ueno and transfer to the “Ginza Line” from Ueno.

The Keisei Line goes directly to Ueno, so it’s convenient to use the Skyliner or Keisei Line!

When you reach Ueno, change to the Ginza line and it’s 2 stations!

Before using Narita Airport, check which terminal you will use!

If you’ll use Terminal 3, you need to move to Terminal 2.

There is free shuttle bus, so it is recommended to use that!

If you want to go cheap, take the train！

Next is how to get there by bus!

There is no direct bus！

However, some routes are currently suspended due to the Covit-19, so you need to check before using!

How to buy a ticket

Tickets can be purchased at the 【Bus Ticket Vending Machine】 at each terminal.

The limousine bus will get off at the “Yaesu Exit” of Tokyo Station.

Take the Toei Bus bound for “東42-1 Minamisenju Sta. Nishiguchi” on the Yaesu Exit side No,⑫.

Get off at “Tobu Asakusa Ekimae” and you’ll be in Asakusa!

You can take a 【fixed-rate taxi】 from NRT to each place of Tokyo. *Advance reservation required

“NRT ⇔ Asakusa” has a fixed-rate of ￥20,000, but you need to pay a highway fare in addition to the fixed-rate fare.

The highway fare is not fixed(not decided which highway to use), the actual fare is not known in advance.

Uber is a pick up service that uses an app.

It is a system that you can know the estimate in advance.

Credit information is registered in advance, it is convenient to get off without paying after using a taxi!

This time, I am writing the amount estimated. Please note that prices may vary depending on the time of day.

★Estimate with Uber
★Use Uber

Uber has a driver evaluation system, so they will drive you carefully!

Did you find the perfect transportation?

I wish you a pleasant trip to Tokyo!

▼This is a summary of 【NRT ⇔ Each place of Tokyo (Tokyo, Shinjuku, Shibuya, Ueno, Asakusa)】！