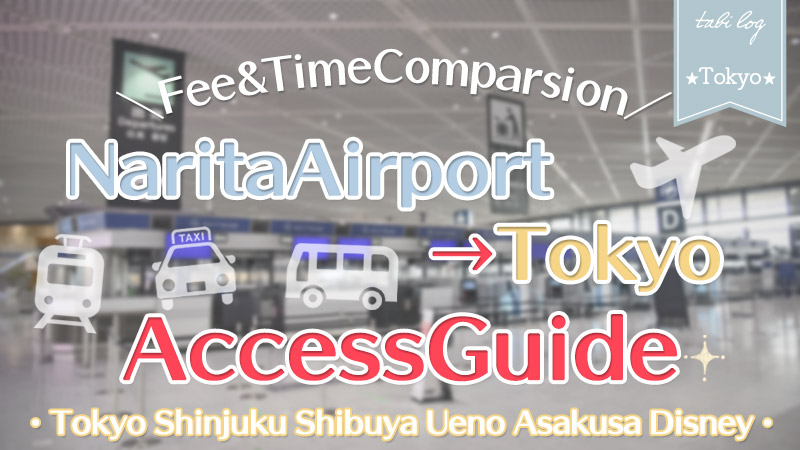 Trip to Tokyo！So…
How is it cheap and fast to get to Tokyo !?

For such a person this time…

Do you want to go cheap or easy…You can see this at a glance!

The main ways to get from Narita Airport to Tokyo are by “Train”, “Bus”, and “Taxi (pick-up service)“.

There are two train lines, “Keisei Line” and “JR Line”, and they have each Airport Express “Skyliner (Keisei)” and “Narita Express (JR)“.

It’s better If you choose a transportation from Narita to Tokyo depending on your destination◎!

Cheapness, speed, easy… Let’s choose the movement method depending on which one is important!

【NaritaAirport→Tokyo】Access Guide! Fee & TimeHow to get to Tokyo from Narita Airport ! Access by Train and Bus. Fee, Time, etc......

【NaritaAirport→Shinjuku】Access Guide! Fee & TimeHow to get to Shinjuku from Narita Airport ! Access by Train and Bus. Fee, Time, etc......

【NaritaAirport→Shibuya】Access Guide! Fee & TimeHow to get to Shibuya from Narita Airport ! Access by Train and Bus. Fee, Time, etc......

【NaritaAirport→Ueno】Access Guide! Fee & TimeHow to get to Ueno from Narita Airport ! Access by Train and Bus. Fee, Time, etc......

【NaritaAirport→Asakusa】Access Guide! Fee & TimeHow to get to Asakusa from Narita Airport ! Access by Train and Bus. Fee, Time, etc......

That’s all for the comparison of transportation from Narita Airport to Tokyo!

Did you find the best transportation?

From here, summarize “How about Narita Airport” and “Important Point”!

How about
Narita Airport

Before using Haneda Airport, check which terminal you will use!

Next is a Important point on each transportation!

Which is better, N’EX or SKYLINER

There are two Airport Express departing from Narita Airport.

The N’EX is about ￥500-700 more expensive, but it covers all major stations in Tokyo.

SKYLINER is faster and cheaper, but the main stations are only Nippori and Ueno, you need to change trains to move to Tokyo.

3 buses selected for this “Bus Transportation”.

Buses departing from Narita have few destinations, so you need to choose a bus that suits your destination.

Whether or not you have a reservation depends on the bus, so check the details!

How about Fixed rate Taxi and Uber

I chose Uber this time, but there is also a “Fixed-rate taxi”.

A “Fixed-rate taxi” has a fixed fare for each ward of Tokyo from Narita Airport, but you need to pay a highway fare in addition to the fixed-rate fare.

The highway fare is not fixed(not decided which highway to use), the actual amount is not known in advance.

Also, from Narita to Tokyo is a long-distance, so taxi is expensive as you can see from Uber.

Uber is a well-known ride-hailing service. Unlike a taxi, you can know the price before you get on the taxi, so you can use it with confidence.

This time, I wrote the estimated amount below, but please be aware that the price may change depending on the time and time of day.

★Check the cost
★Use Uber

Choose the means of transportation that suits your purpose and move comfortably!

I wish you’ll have a great trip to Tokyo!

【Map of Japan】Prefectures,Shinkansen,Airport I made a 【Map of Japan】 for those who travel to Japan! There are 3 tipe of maps ! Let's Download and Use it!!...